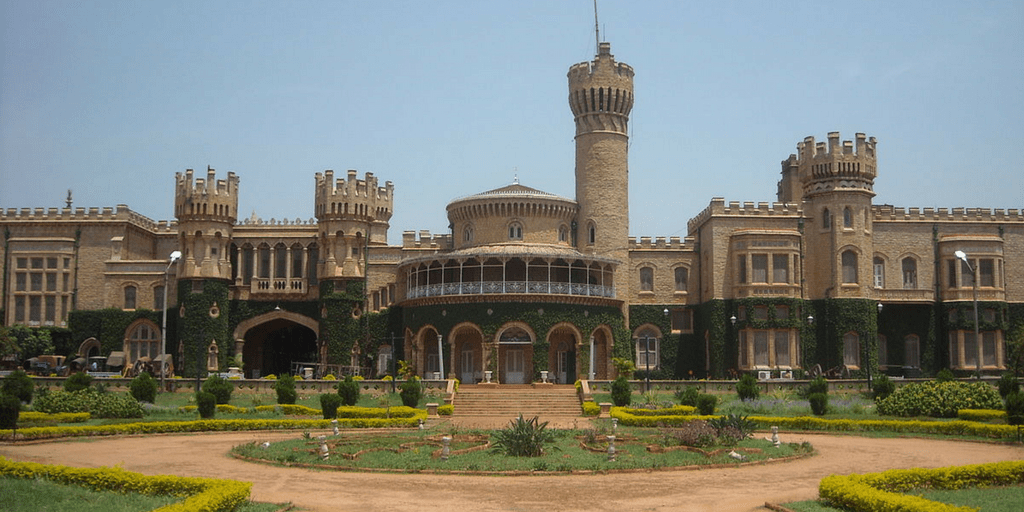 Bangalore Palace is in the heart of the city. The kings from the Wodeyar dynasty constructed this palace in 1887. Spread across 454 acres this palace is popular for its mesmerizing architecture and wooden carvings. It also happens to be Tipu Sultan’s lavish summer home. The king who built this palace visited England and was awestruck to see Windsor castle in London hence he built this palace on the similar lines. It has beautiful fortified towers, huge basement, and Gothic Windows. You can also enjoy the beautiful gardens surrounding the palace. If you have an eye for art you will also like to admire Raja Ravi Varma’s paintings that are hanging on the walls of this palace. 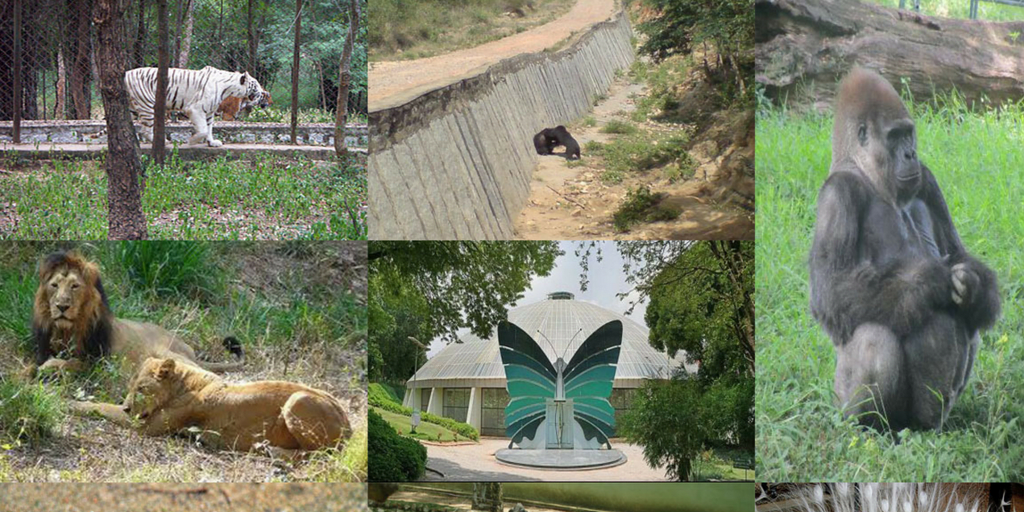 Bannerghatta National Park is 23 km away from Bangalore. Popularly known as BBP, this Park has a biological park established in 2002. The park spreads across the area of 731 hectares. The park has different units such as Butterfly Park, Safari, and a rescue center. It helps in conservation of captive animals. You can see the tiger, elephants, bear, deer, lion and many other animals wandering in the wild here. Caravan experience at Bannerghatta will be one awesome moment for you. The main motive behind this Biological Park was to create an opportunity for children to have a biological recreation center that will get them closer to nature. 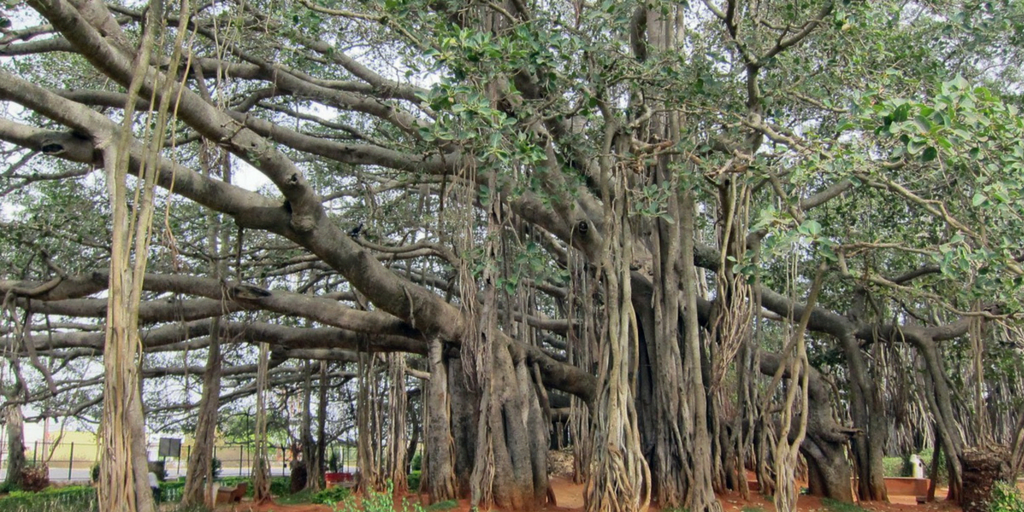 DoddaAlada Mara means Big Banyan tree in English. Located in the village of Kethohalli in Karnataka this Banyan tree is 400 years old! It is 25 km away from Bangalore. This ancient Banyan Tree has its roots hanging all over the place and there are plenty of monkeys enjoying their little ones. This is also one of the oldest Banyan trees in the world. A lot of people take a bicycle ride to this place early in the morning, have a mini picnic and come back in the evening. The place offers peace and serenity that most of us are looking for. 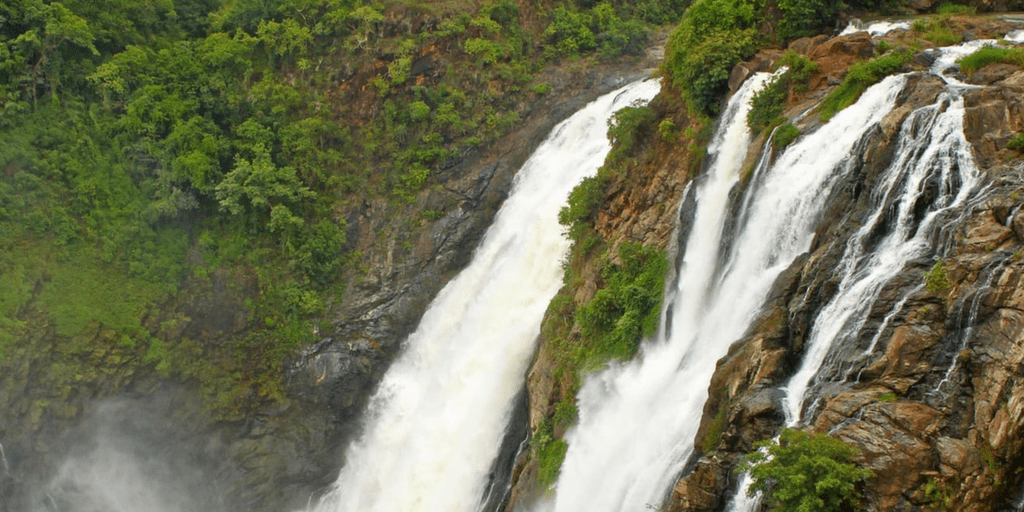 Commonly known as Pearl Valley, this place is 43 km away from Bangalore. The best time to visit this place is right after the Rains during September. It has a beautiful waterfall and a mini lake at the bottom which is safe for kids as well. It is best to take a private vehicle to reach here though, bus service is also available. Tourists who have visited this place do not forget to mention that you should pack your food and water as there are no hotels nearby. There is also a temple dedicated to Lord Shiva. 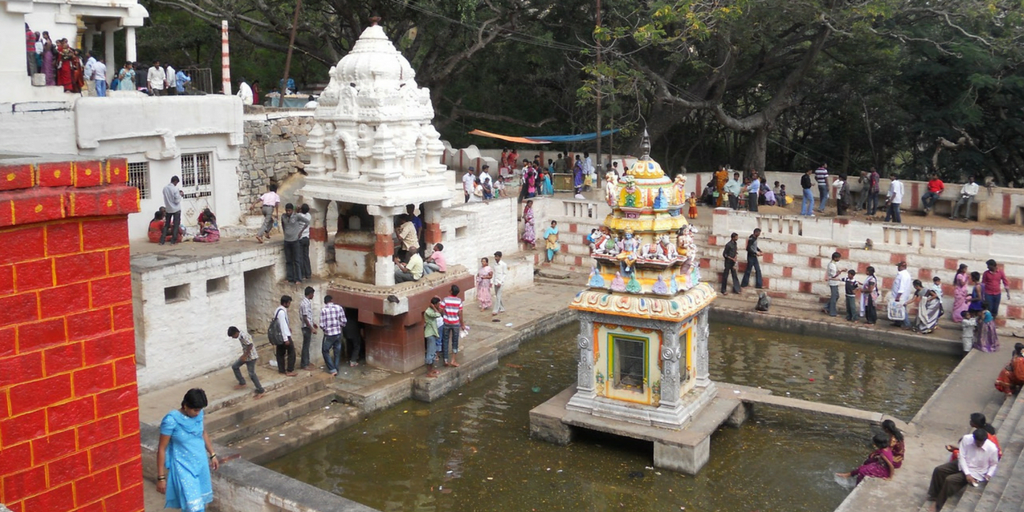 Anthargange is a rocky Hill range 80 km away from Bangalore. Situated at the height of 4021 feet in Kolar district. Anthargange translates to innerspring. There is a secret spring that flows through the hill. There is also a temple situated in the middle of the hill. You have to walk up the hill for 15 minutes to reach the temple. This Ancient Temple has a pool formed by the water of the secret spring. Be aware of the monkeys are here as the attack pilgrims and steal food. Anthargange night trek will be a treat for adventure lovers.

It is also popular among trekkers. Antharagange caves are at the top of the hill and you have to take for about an hour to reach the Caves. Some of these kids are also good for camping. So if you are looking for an adventure 2 day trip from Bangalore this place is an option for you. Since there are no restaurants here it is better to carry your food and beverages. The best time to visit this place is during the monsoon. 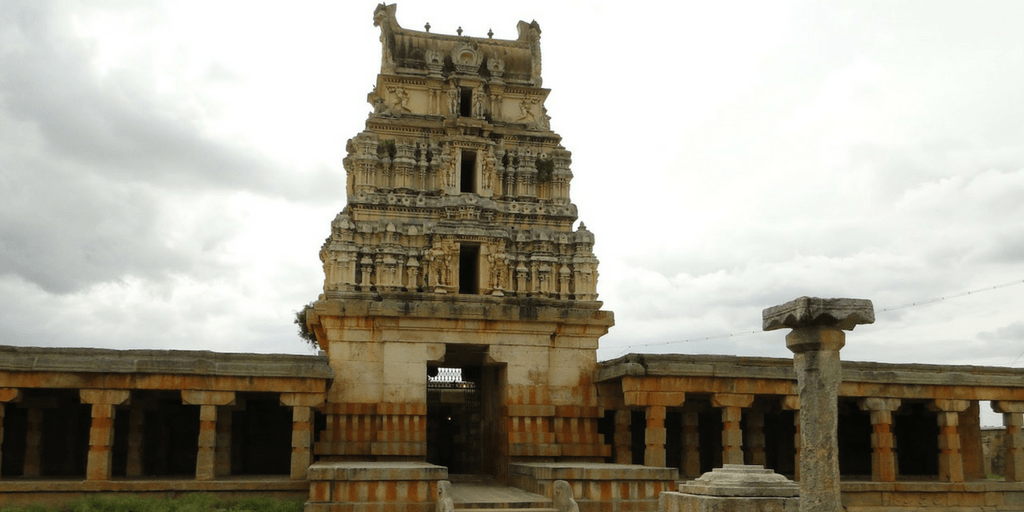 Kolar is a small town at the distance of about 70 km from Bangalore. This place is popular for gold mines. Apart from that it also has several tourist attractions like Kolaramma Temple and Sthe omeshwara Temple. Both these temples are ancient and hold archaeological importance. Built during Vijayanagara rule this temple belongs to the 14th century. Like all the other South Indian temples this Temple also has a large Tower with integrate carvings. Stepped Temple Tank is another major attraction here.

On the other hand, Kolaramma Temple also has a rich history. There is a belief that they built the temple in the 5th century during the Ganga Dynasty. It has several carvings on it depicting stories from the history. This place is close to Anthargange and you can cover both these locations in one day. 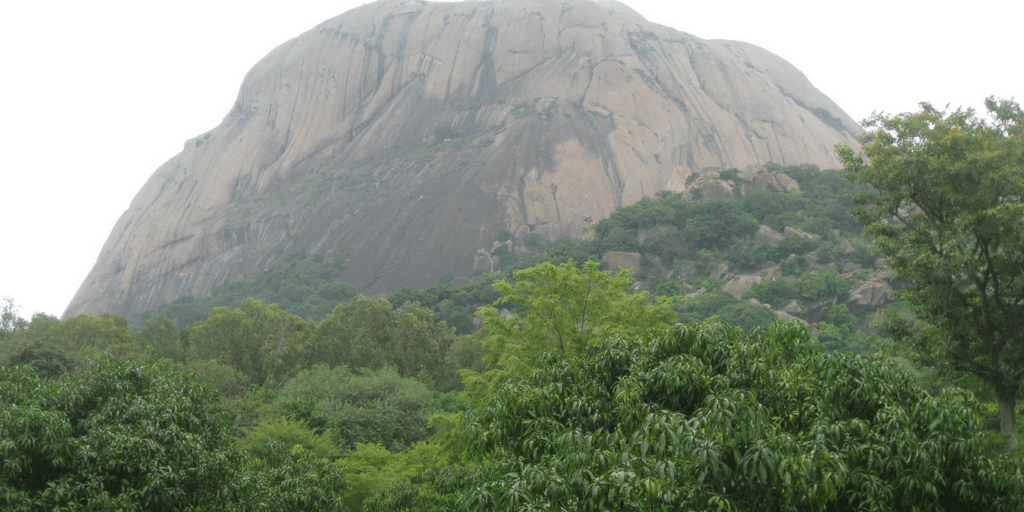 Savanadurga is about 60 km west of Bangalore. It is one of the largest single message rock hills in Asia.  Two Hills namely the black hill and The White hills formed Savandurga. These Hills are home to some of the endangered species like the long-billed vulture, yellow-throated Bulbul and white-backed vulture.  The night treks at Savandurga are very popular. If you are lucky you may also get to see leopards in the night. The Trek to Savandurga is quite challenging hence you should avoid taking kids with you. The best time to visit this Hill is during winters. There is a temple at the top of the hill and you can enjoy misty mornings, sunrise and beautiful nature from the top. If you are looking for a one day trip to Bangalore, this place is something that shouldn’t miss. 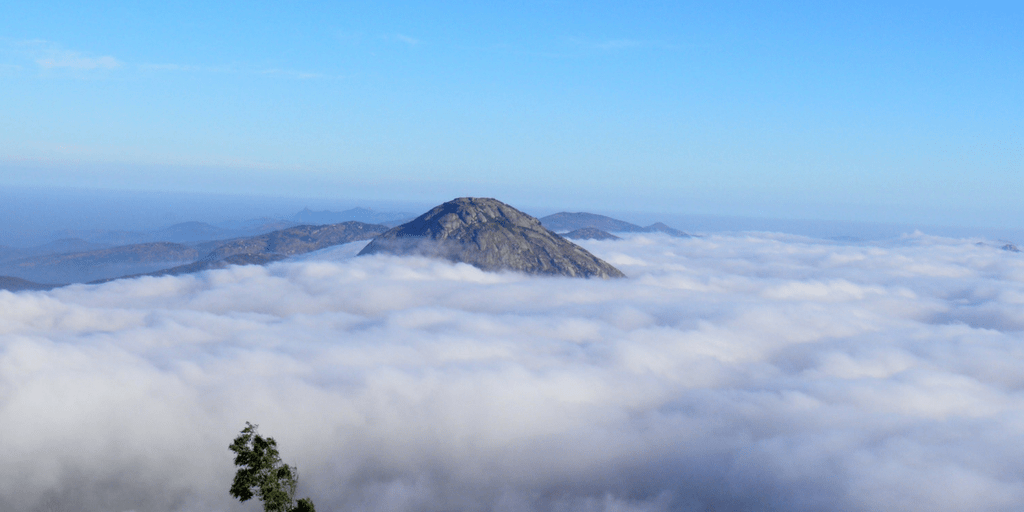 Nandi Hills is one of the most popular hill stations near Bangalore.  It is also one of the Best Places to visit near Bangalore within 100 km. Also known as Nandi Betta in the local language it is an ancient hill fortress. The shape of these Hills resembles are sleeping bull. Hence the name is Nandi Hills. There is a 1300 years old Dravidian style Nandi temple situated here. There is also an ancient Lord Shiva temple here. This Shiva temple is one of the oldest temples in Karnataka dating back to the 9th century.

Some of the tourist attractions On the Hills are Tipu sultan’s summer palace and Fort, the Secret escape routes and the stone doorway for horses. If you are seeking for adventures in Bangalore, Nandi Hills offers paragliding cycling and also boat rides that are safe for kids as well. 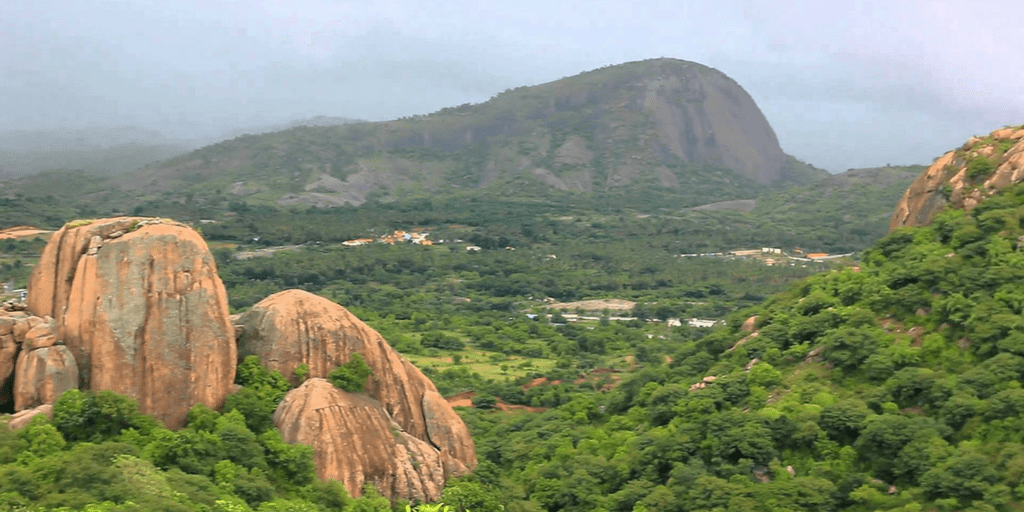 Ramnagar is a hilly terrain about 49 km away from Bangalore. This place is famous for Ramadevara Betta. It is also popular for silk farming and Mysore Pak, a popular sweet dish. If you are looking for Plenty of Rock climbing and adventure camps in Bangalore this is the place for you. This town became popular as the cult hit Sholay was shot here (Remember Gabbar’s den?). If you are a religious person there is a Lord Ram temple. But you reach to the temple you have to take a short trek. This temple is unique as unlike other temples here Sita is sitting on Lord Ram’s lap instead of standing beside him. 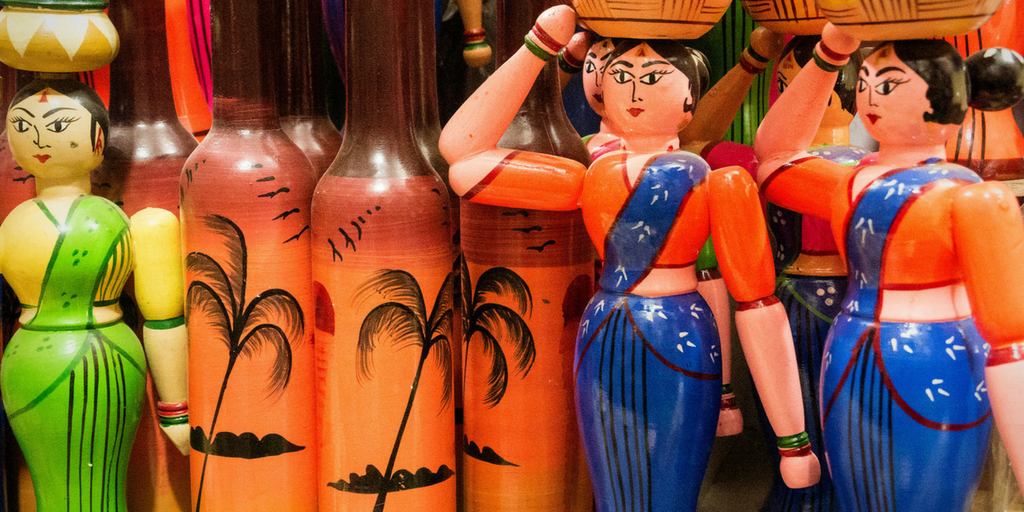 The locals from Bangalore have probably visited this place already. It is one of the most popular Places to visit near Bangalore within 100 km. Channapatna is a popular town of toys in South India. It is also famous for lacquerware. This place is 60 km away from Bangalore and is easily reachable by private vehicle. In the entire town, you can find wooden toy factories handicrafts and stores that sell lacquerware. The most important thing about these toys is that they are all made with vegetable dyes and are eco-friendly. This makes them children friendly too. Majority of the wooden toys that you see anywhere in India are made here. You may also buy stationery items and jewellery along with the toys. Apart from shopping for toys you can also enjoy the intricate carvings of Varadaraja temple and get to know more about Silk farming.

In Love With The Garden City: 17 Reasons Why “Namma Bengaluru” Is Just Awesome!

Things to Do in and Around Bangalore For Adventure Travelers