We round up some of the unique, fun sporting activities in the city for you!

You’ve played Foosball with the plastic players, now, be one of those players yourself. It’s the same thing as regular foosball, only life-sized. On a 32-foot-long and 16-foot-wide field, players hold on to rods in set positions. For the next 30 minutes, you play as you would the smaller version. It’s better if you have 10 people, but six will do too. Great for teamwork, and even better for a fun day out.

Stay on the ball

Play Padel, first invented in Mexico in 1969, now played in 30 countries worldwide. In India,Bengaluru is the first lucky recipient. The Padel racquet is shaped like a tennis one, only bigger and thicker with holes punched into the fibre glass surface. It’s always played as doubles, follows the rules of tennis and is played on a court 1/3 the size of a tennis court. The twist? Like in squash, you can play off the walls too.

Catch it if you can

The best things in life often don’t come with a high price tag. One such thing is Frisbee. All you need is a flying disc, a bunch of friends, an open ground, a few rules, and you are set. But if you still think you aren’t cut out for this game, The Flying Disc School of India will make you rethink that. Formed last September in Bengaluru, this group wants to promote the game of Frisbee and the athleticism, sportsmanship, and joys that come with it. The organise group practice sessions every Sunday at Annasawmy Mudaliar Ground in Frazer Town, so call them and join.

Get high and higher

The joy of jumping, flipping and falling on a trampoline is like none other. And if you didn’t know, NASA says that you can burn the same amount of calories by running on a treadmill for 30 minutes as you can by bouncing off a trampoline for 10 minutes. With that in mind, head over to this indoor trampoline park at SKy Zone Bengaluru at Forum Shantiniketan in Whitefield. It allows you to try ‘Freestyle Jump’, ‘Ultimate Dodgeball’, ‘Warrior Course’, ‘Sky Slam’, ‘Warped Wall’, and gives you access to ‘Drop Zone’, ‘Toddler Court’, and ‘Toddler Foam Pit’. It’s a great add-on to birthday celebrations or group outings.

It’s the season of love and this cafe has something cute to warm your hearts and souls. It is inviting one and all to come over, pick up a heart-shaped paper-cutouts at the venue, and write down in a single line what love means to you.

These notes will then go up on their ‘Wall of Love’.

A lot of health problems can be resolved just by breathing correctly. FM Alexander (1869-1955) was known as “the breathing man” who examined all known breathing methods of his day and came to the conclusion that they were all inadequate or artificial. His devised approach is based on the natural functioning of the organism. That was what was special about his idea of breathing. This weekend, learn to do just that with a workshop on the original Alexander Technique method of breathing. In this workshop, you will learn to breathe in terms of Alexander’s outlook. The three-hour workshop will teach you the basics of Alexander’s approach, how to recognise limiting breathing habits in yourself and then, how to employ his time-tested methods to improve your own breathing capacity, fluidity and control. Practitioner Robin John Simmons will be conducting the class. Simmons has been teaching the Alexander Technique since 1971, and has been training teachers since 1982. He previously trained in acting schools in London and has had exposure to a number of systems of breathing. He has given coaching to internationally renowned singers and musicians in both the classical and pop music worlds. He believes Alexander has the most comprehensive understanding of natural human breathing. Among the people he has worked with are musician Sting, Classical Cellist Alexander (Sandy) Baillie and the orchestra at the Opera House. So you can rest assured that you will go back with a better understanding of your breathing.

This Article was First Published at BangaloreMirror.com

Happy Guzzlers Unite At The Bier Library In Koramangala As It’s Offering 2+1 On Drinks!

It is also offering an additional 10% discount on your bill!

For us millennials, the idea of a LIT Saturday night includes sipping on a few pilsners of beers, in a relaxed setting, all the while grooving to some great music. As such, if you are planning a fun evening out with your crew, then there’s no better place to chill at than the Bier Library in Koramangala. Why do you ask? Well, you would be thrilled to know that this microbrewery is offering 2+1 on beverages, besides giving you an additional 10% discount on your bill! 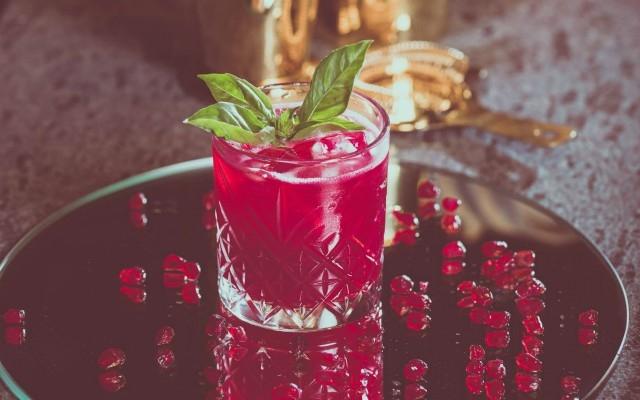 This microbrewery spans across two spacious floors and serves as many as seven styles of beers varying from subtle varieties such as Munich Lager, Belgian Wit, and Hefeweizen to stronger variants like IPA and Pale Ale. On top of that, they also have a ‘Brewer’s special beer’ that are rotated regularly. The Jager Bombs, Long Island Iced Tea, Mango Passion, and Sweet Basil Martini make for other popular drinks.

The Bier Library is also absolute heaven for foodies, as it plates up some scrumptious dishes that will leave your tastebuds absolutely satiated. You should definitely try out their Fish Fingers, Grilled Vegetable Pizza, Peri Peri Chicken, Butter Garlic Prawns, and Classic Chicken Tikka, which would make for perfect accompaniments to your drinks. 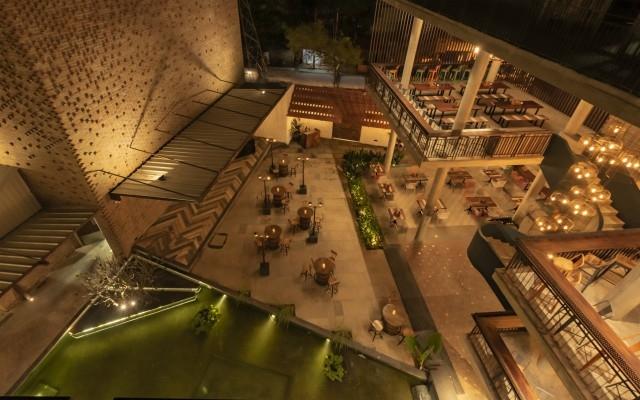 The ambiance makes for an Instagram worthy template. The massive brick walls contribute to a grand industrial setting, and the dangling chandeliers, leather sofas, and dim lighting add to the overall aesthetic.

We appreciate booze round the year and how can we not? We are in THE Pub Capital of India. However, Christmas is especially a time we look forward to the warm, spicy mulled wine and all its wonderful variations that the restaurants in Bengaluru have to offer. That and eggnog of course. However, few places in the city make eggnog, so we’ve gone ahead and listed those too. Go ahead, read, drink and wish you a merry Christmas. 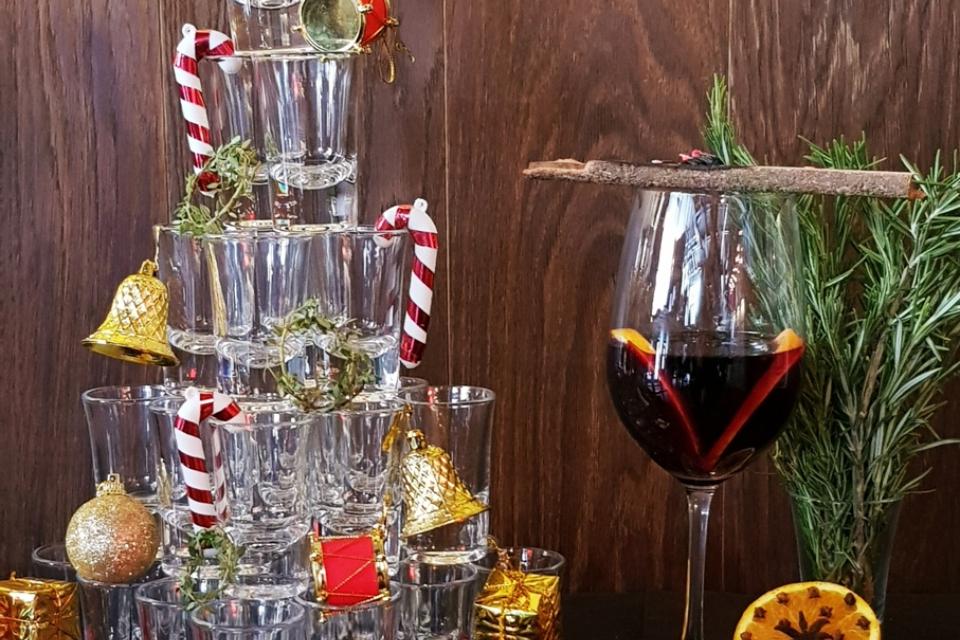 A rather popular haunt for Mexican food and vibrant, lively space by celebrity chef Vikas Seth, we are excited about the delicious Strudel Mulled Wine at this restaurant with flavors of cinnamon, apple, and raisins. They have the Classic Eggnog on the menu too apart from some unique dishes from the Mexican inspired menu. We can go on endlessly about how much we are fond of everything at Smoke House Deli, be it the consistently great food, delicious fruit-infused cocktails or even its pretty white ambiance. However, this Christmas, we are heading here for the House Fusion Mulled Wine made using their fruit-infused wines, the same used for their other cocktails but more Christmassy from the spices and fruits. 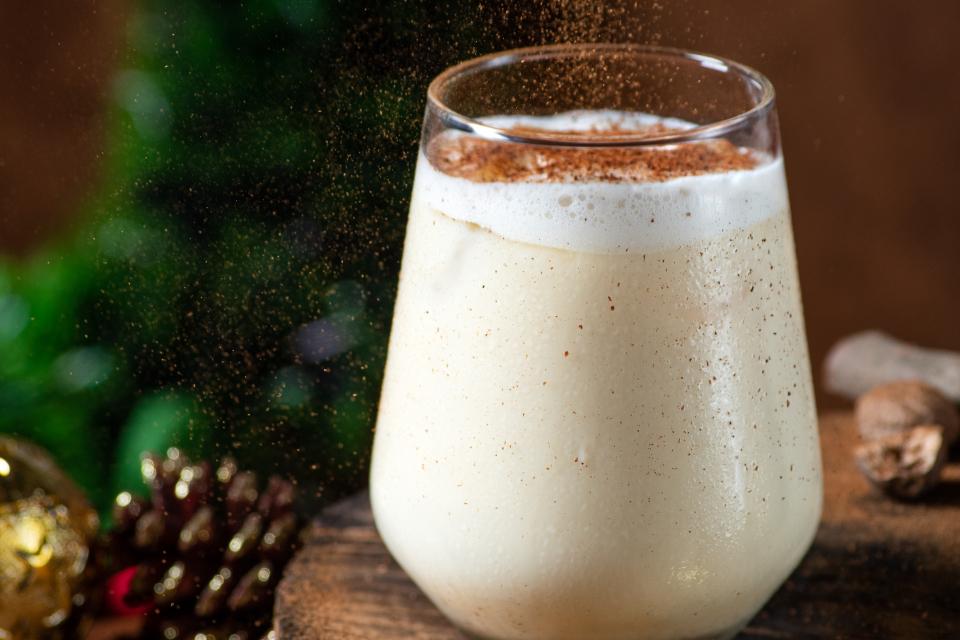 Known especially for large options in cocktails and unique mixes, we aren’t surprised that the joint has a Christmas special Eggnog and Mulled Wine. While they have gone traditional with the two classic drinks, they have whipped up specials like Yuletide, Christmas In Mouth and North Pole. 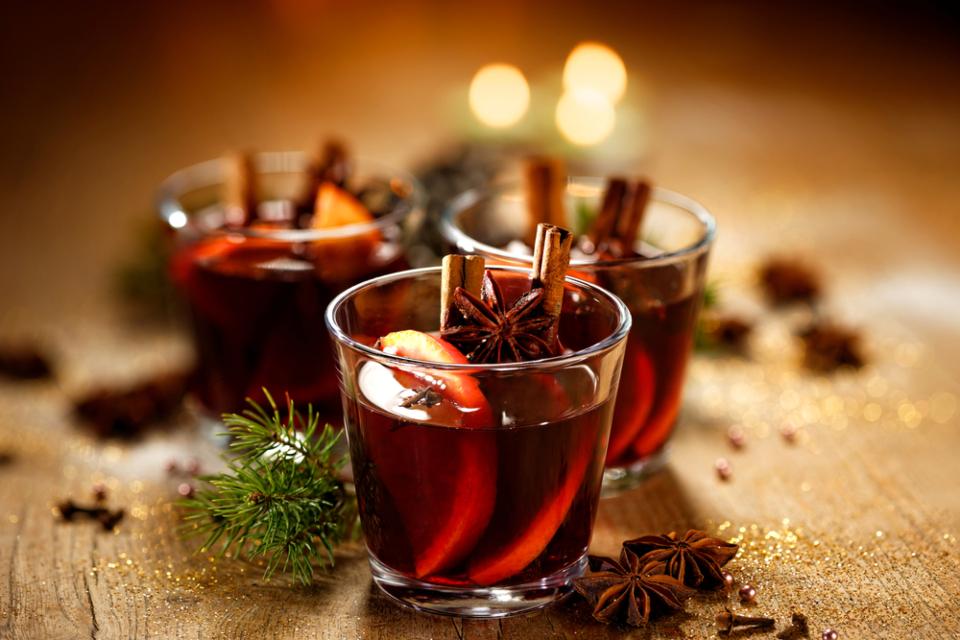 Uru Brewpark made tremendous news this year for being the only brewery inside a park, an ode to the Garden City we think. That said, head to Uru Brewpark this Christmas for many glasses of warm, fruity Mulled Wine teamed with an elaborate buffet of Indian and continental Christmas themed dishes. 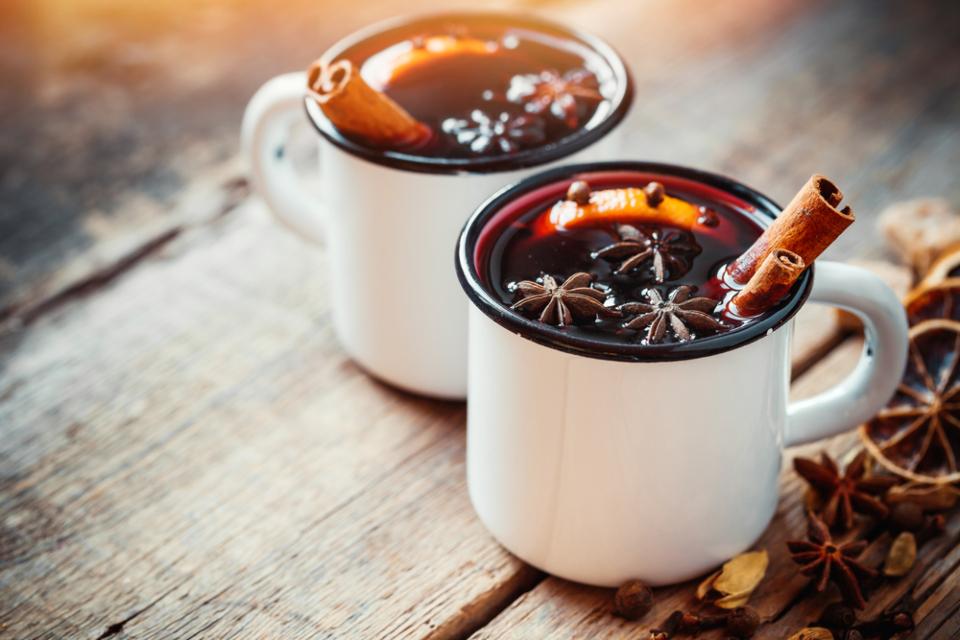 The newest joint in the city offering modern Indian cuisine, Rahi is bringing seasonal Christmas themed vegetarian and non-veg specials to the table along with glasses of soulful Mulled Wine. If you haven’t been to the place yet, there is no better time than Christmas to experience it. 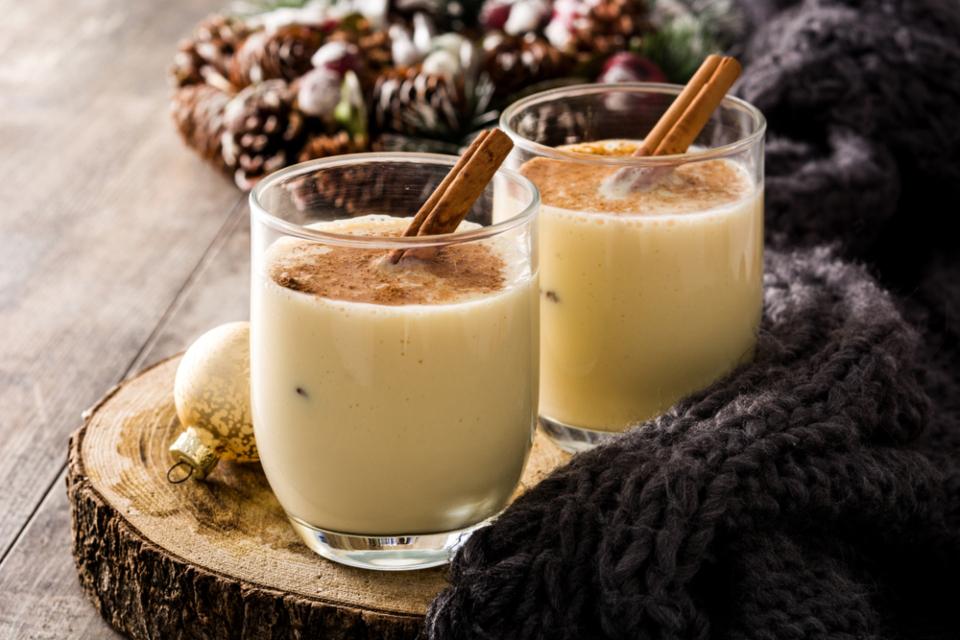 Go Byg this Christmas with special Mulled Wine and creamy Eggnog at Byg Brewski which is quite the favourite with the Bangalore crowd for its beautiful ambience and beers. There is also a Christmas brunch complete with Traditional Yule log, Croquembouche, Minced Pie to help you finish the glasses of drinks. 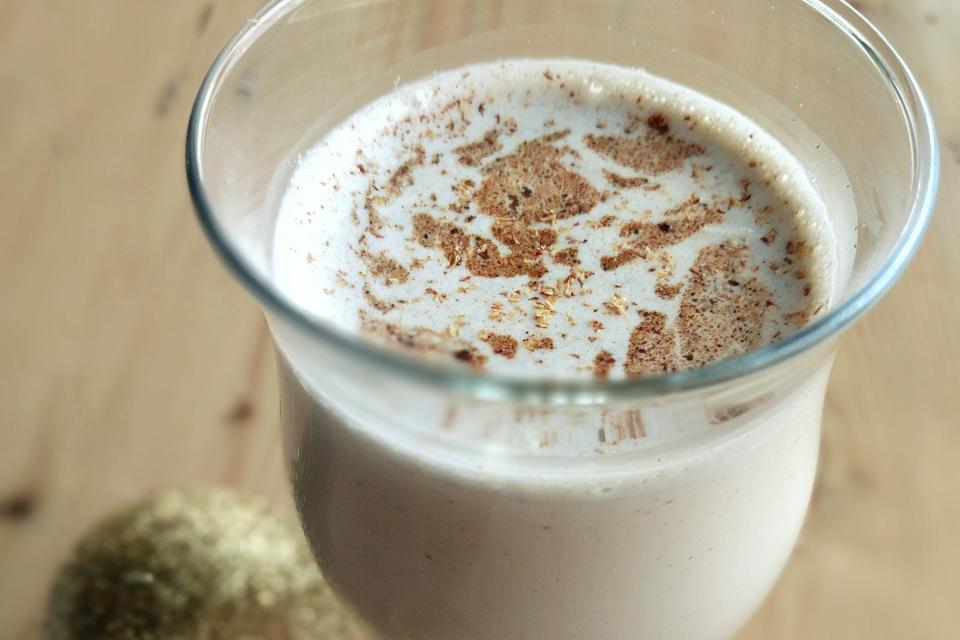 We had dropped by Cafe Felix last year for Christmas and kept reminiscing about the delicious Mulled Wine and Boozy Eggnog all year long! We sure are dropping by this year too for more of their special dishes like Classic lamb borscht, Pan Seared Aubergine, and Felix Turkey Roulade.

Colourful Slides To Ball Pits, Tumble Town In HSR Layout Will Be Your Kiddo’s Fave Place!

Take your tiny tots to Tumble Town in HSR Layout and watch them make merry while playing in the ball pit, gliding down the slides and taking part in different activities. 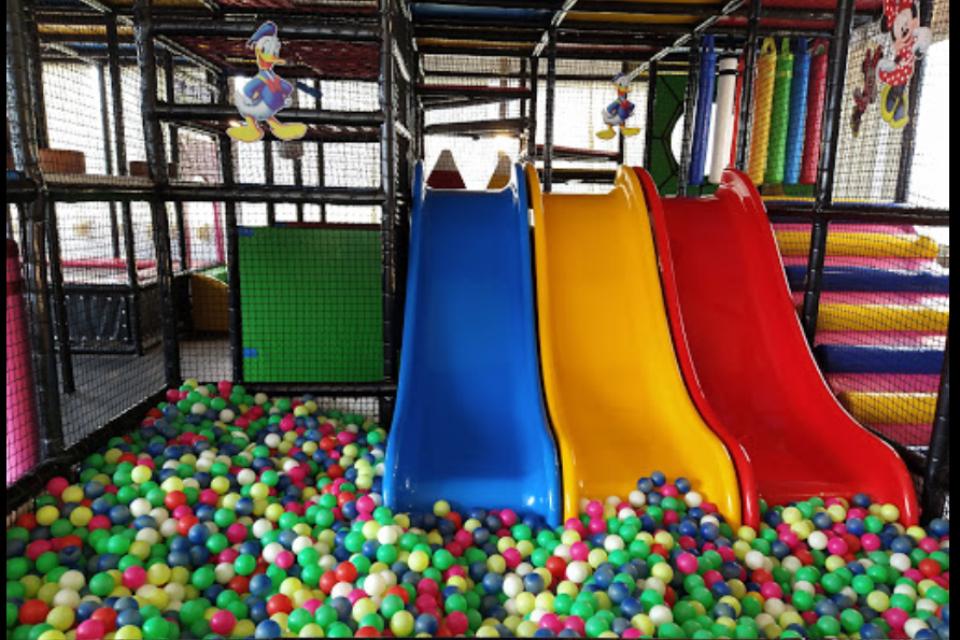 Nestled in HSR Layout Sector 2, Tumble Town is an indoor play area and activity center for your little kiddos. Spread across two floors, the place is perfectly equipped with the most advanced equipment and well-maintained to ensure all-round development of your child. These guys have trained staff and will take good care of kids, so you can relax and take some time off from baby duties. 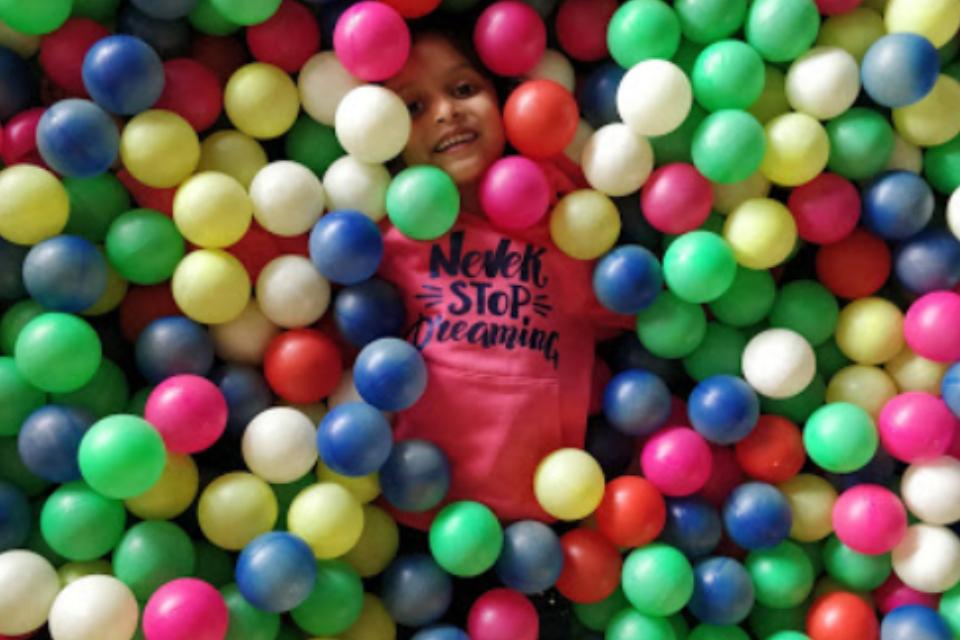 Once inside, you’ll find the play area filled with hu’rdles and slides as well as trampolines and blocks for children between five to 12 years of age. They can enjoy playing on the crazy tu’nnels, tube slides, ladders, and jungle maze. Plus, there’s also a ball pit where your kids can dive into. How cool, isn’t it? They have a separate section dedicated to toddlers with see-saws, fun climbers, baby slides and more. 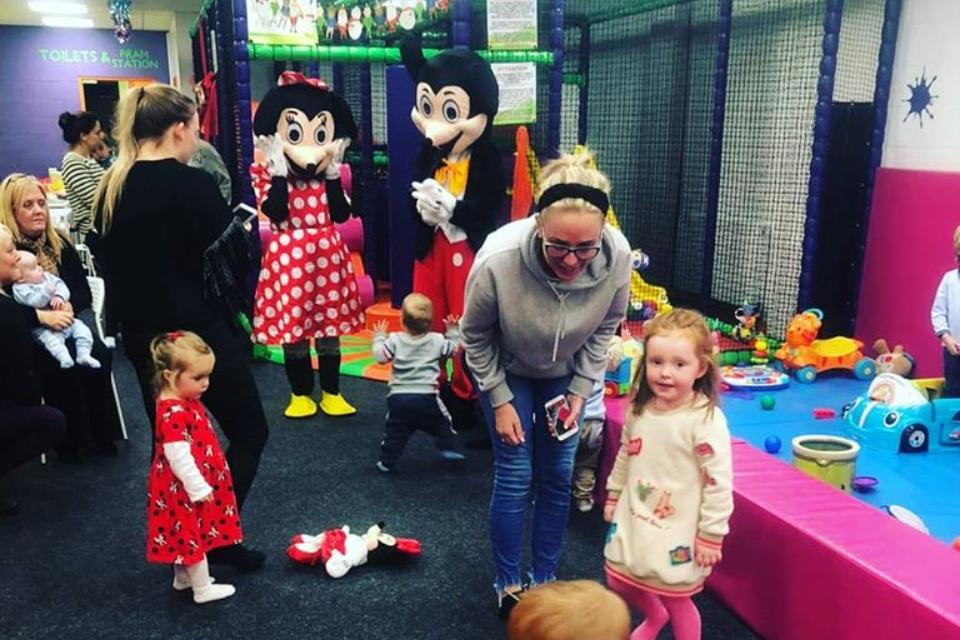 What sets them apart from other play zones in the city would be that they offer multiple workshops and classes for kids of different age groups. Everything from hip-hop dance classes to karate classes (for five-plus-year-old kids) and cookie decorating sessions to singing classes can be found in their lineup! Additionally, this place will also be a great venue to host your child’s birthday party or other events. So, next time you want to take your little munchkins out, drop by here!